Alexandre Birman was destined to create beautiful, handcrafted shoes. A native of Brazil, Birman was born into a family that dominated the South American footwear market. “I was raised in a shoe factory — and that’s not marketing, that’s the true story of my life,” he often says of his upbringing.

Having his talent nurtured by an environment of shoemakers at a very young age, Birman’s first designs within his father’s factory were at the mere age of 12. Alexandre learned the art of shoemaking before studying in Boston and Florence, Italy, and eventually returning home to carry on the legacy. He designed his first shoe at the age of 15, which made perfect sense for a boy who grew up surrounded by fashion, style and shoes his entire life. He continued to design for the youthful collections for the next 15 years. As his vision slowly shifted away from contemporary design and into sophisticated craftsmanship, Alexandre decided to break out on his own and launch his first self-entitled luxury collection.

In spring 2008, 32-year old Birman launched Alexandre Birman, which focused on extravagance and sophistication. The collection was entirely created from luxurious, imported raw materials and exotic reptile skins reminiscent of his South American roots. It quickly landed him a designer profile in VOGUE and after a successful season of design recognition and sales explosions, industry publication Footwear News honored Alexandre with the prestige Vivian Infantino Emerging Talent Award of 2009. 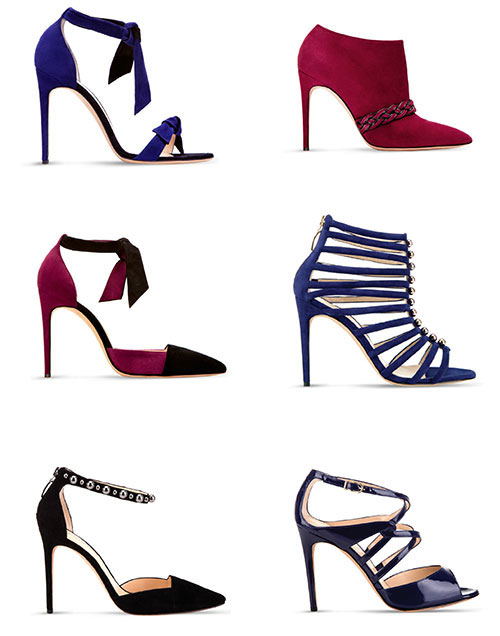 The Alexandre Birman collection is originated in the South of Brazil, with headquarters in Campo Bom, which is close to Porto Alegre in southern Brazil.
This traditional shoe-manufacturing region has been developing the mastership of shoe production since the 1880s. For the past 2 seasons the Brazilian craftsman have been exchanging technologies with Italian artisans, and production has therefore also been shared with the finest shoe-making region outside of Milan, Italy, also one of the world’s top cities known for their ultimate footwear capabilities.

The objective of the Alexandre Birman brand is simple — produce high-quality, one- of-a-kind footwear with creative craftsmanship inspired by the designer’s lifestyle, culture and worldly travels. Birman’s use and mixture of exotic materials—many times combining suedes and leathers with alluring skins such as python, snakeskin, ostrich and crocodile—has become a trademark of the brand.

Every shoe is handmade and materials are imported from Italy, and each shoemaker thoroughly trained by masters of this craft: the traditional finishing processes, such as leather tressing and saddle stitching, derive from the fine technique executed by each region’s ancient artisans. Monochromatic lining and sock, always in beige goat leather, are a solid characteristic of the brand.

Alexandre Birman is available at Bergdorf Goodman New York, and Neiman Marcus, Saks Fifth Avenue and Nordstrom stores across the entire United States; online the brand is available via Net-a-Porter.com. Outside of the U.S. the collection is sold at Printemps, Lane Crawford, and Saks Fifth Avenue Dubai. In the U.K. the brand is sold at the prestigious Selfridges and Harvey Nichols department stores.

All of the brand’s skins are derived from legally breeding farms in Asia that are certified by the Convention of International Treaties for Endangered Species of Wild Fauna and Flora (CITES), as well as the U.S. Fish & Wildlife Conservation and Management Authority. 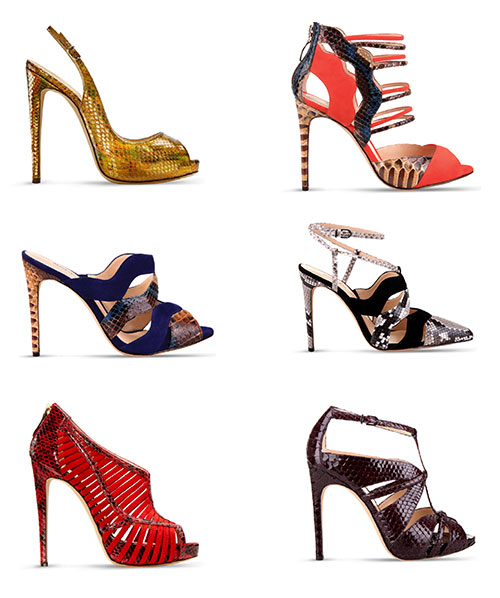 For Pre-Fall 2013, Alexandre Birman expands his eponymous collection into fresh territories with new materials, innovative textures, a rich color palette, and unique embellishments that converge in a truly Luxe Assemblage. The collection has three main themes that are seen throughout; Organic Camouflage, Neo Baroque, and Chic Essentials.

Organic Camouflage evokes nature with fluid waves of suede, mixed with multi-color and natural python. Signature styles evolve into sensual new shapes in rich shades of olive, blue, and arancione which contrast beautifully and ensure that the wearer will stand out, no matter what the occasion.

With Neo-Baroque, corsetry and cut-outs prevail, creating beautiful silhouettes that go from day to night with ease. A neutral color palette comes to life with bright pops of violet and flashes of metallic in an array of rich suede and buttery capretto materials. Intricate braids add depth to elegant styles in opulent jewel tones, and sexy lace-up details create drama. 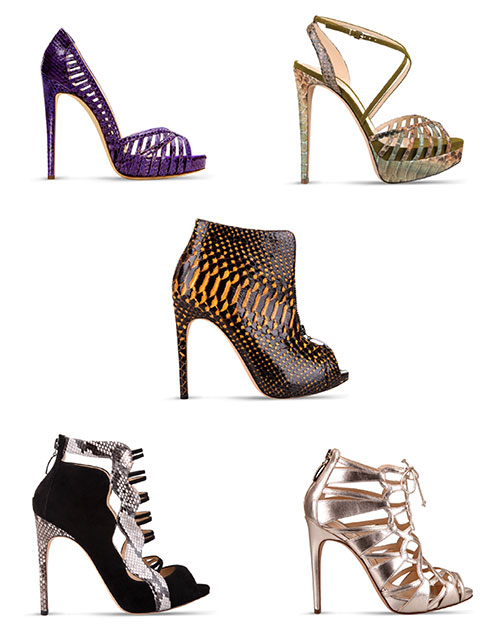