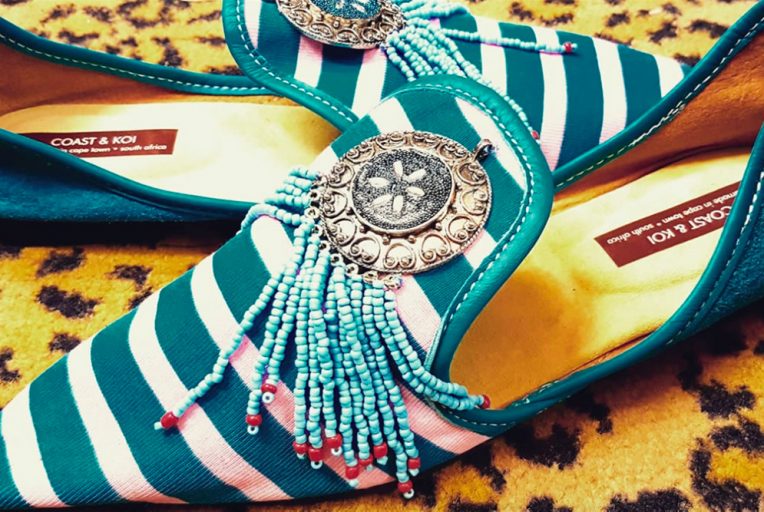 How Caryn Wilensky built her handmade shoe design brand, Coast & Koi, one step at a time.

If Matisse and Marie Antoinette were to have met across the time-space continuum, they would have both felt equally at home in the tiny showroom of Coast & Koi. 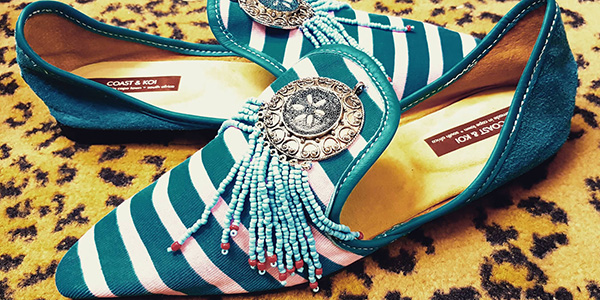 Housed in a ground-floor garage of one of the apartment blocks that look out over the ocean in Cape Town’s Sea Point neighbourhood, it is an Aladdin’s Cave stacked from floor to ceiling with ballet pumps of every persuasion (metallic, leather, sequined, velvet, beribboned and bedecked).

These are the shoes that Caryn Wilensky, who founded Coast & Koi in 2005, built her handmade shoe brand on. A prolific creative with a thirst for all things colourful and patterned, she has broadened her range significantly over the years. 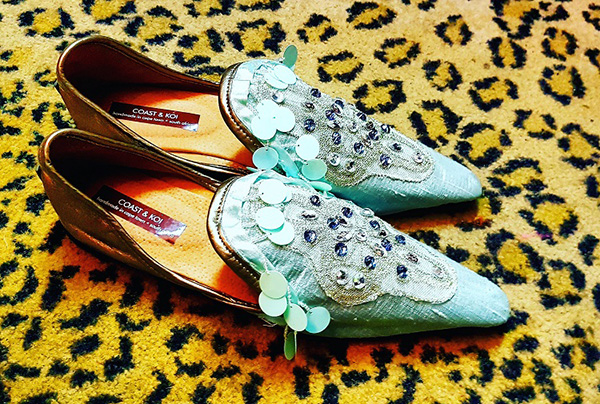 Wilensky may have worked as a fashion buyer for Gucci and Louis Féraud at Holt Renfrew department store in Vancouver for 10 years, but she doesn’t follow a carefully calibrated seasonal calendar when it comes to releasing her new designs. She brings out ranges continuously, as frequently as the ideas come.

And come they do.

I’m always downloading, she says of her creative process.

“The ideas float to me in my head. I’ll visualise a whole shoe or I’ll see a piece of fabric and then a shoe will appear in my brain.”

She describes it as a kind of telepathy. “I feel I am being fed because I’ll see, for example, a tribal shoe in technicolour. And then I have to go out and find the right fabric.” 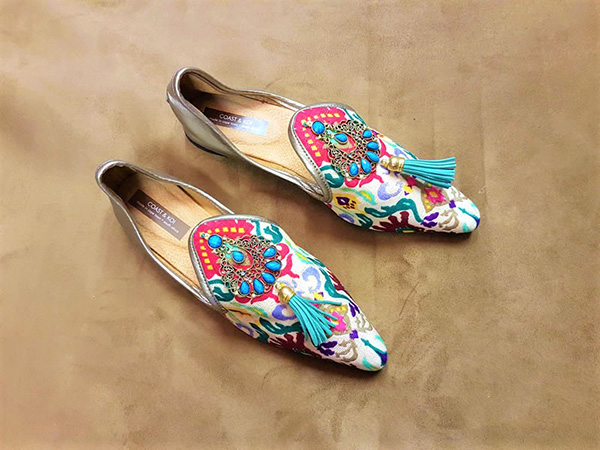 Perhaps the ability to produce her own mental snapshots comes from being trained as a photographer. She never used the skill directly but as a buyer in Canada, she went on frequent sourcing excursions to New York where she had to quickly and confidently select the fashion collections she thought would sell well.

Wilensky returned to Cape Town after a long absence in 2000. She found a job running a factory making ballet shoes in Epping and managing its three retail stores.

Dissatisfied with the shoes sold locally, she started making a few pairs of pumps for herself, drawing on her buying contacts to get the best possible quality.

People began to notice. She was asked by Robyn Lidsky of underwear label Ruby to design and make Spanish dancing shoes for her South African Fashion Week collection. “I thought to myself that I should really be doing something on my own,” she recalls.

She designed petite ballet pumps – the kind of shoes she would wear herself – and sold some pieces initially through her employer’s stores. But they strayed too far from the stores’ focus.

So she started looking at an outlet to make her own brand. 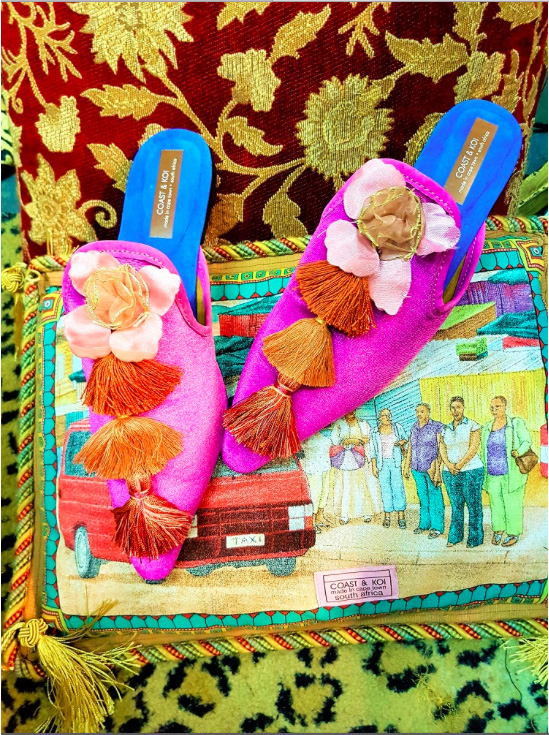 “During the day I managed 60 staff in the factory. I would close up my retail stores at 7pm and then drive out to Athlone to work on my own collection till midnight.”

She was fuelled by the excitement of seeing her designs become reality. “I couldn’t wait to see the designs being made. I knew what I wanted and was very clear about what I liked,” Wilensky says.

GOING ON HER OWN

She took her pilot range of sandals to the Young Designers’ Emporium and quit her day-job soon after,

Under the brand name Nunu Shoes (still the operating name of her company), the range did very well in store – until China hit. “I was selling my shoes at R395 and China was coming in at R295,” she says. “I couldn’t even try to compete with that.”

So she redoubled her focus on high-quality, handmade shoes with a range called Coast & Koi – “pumps for the coast and for upcountry where the safari–going tourists were”. 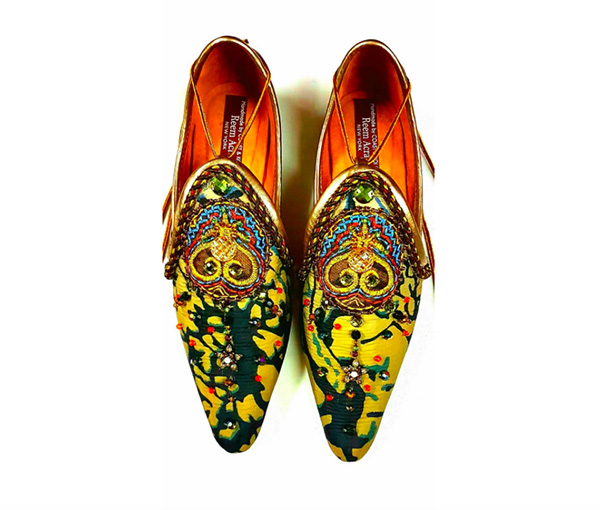 We were really in the deep end. I came back and didn’t know how I was going to put it into production.

“That was how green I was,” she says. “They placed orders and paid for them.” Then she figured out how to make them, hitting some production snags along the way and running late on her first delivery but ultimately keeping her customers happy.

She had to find someone who could manufacture larger quantities, and so began the time-consuming process of making new lasts, the fiberglass forms on which the shoes are fitted.

“I had to learn how to do everything on the go – invoicing and paperwork, running two factories,” she says. She had to wait two to three weeks to get the new lasts made, an expensive exercise that dragged on.

That wasn’t the end of her lasts problems. “Later, I realised that the lasts were too wide. I liked that very svelte Italian look so I had to insist that the last manufacturers go narrower. They refused to do it initially because they didn’t believe people would wear it. I kept shaving them down and finally I got it to what I wanted it to be. They said ‘Look, fine, but you will never get a foot to fit in that’.” 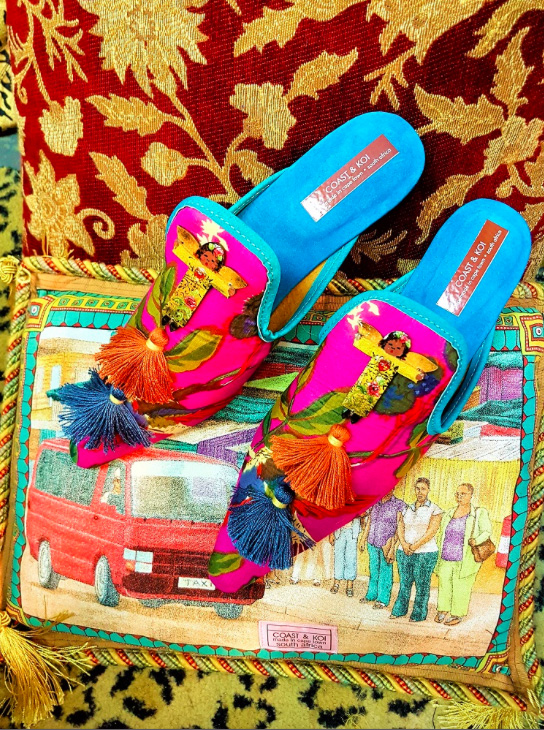 Her snug Italian fit has become one of her trademarks.

“It took a lot of effort to go against the grain. Following your own heart is very important,” she advises young designers. “If aesthetically something is pleasing to you, don’t go with the status quo – it doesn’t matter even if they’re telling you that no one’s done it.”

You’ll soon find out if it doesn’t work – they won’t sell.

These days she is a part-owner of her factory so she is less reliant on external people.

She built up a customer base by appealing to people with the same international outlook as her. “It wasn’t done to buy locally made things then – they were seen as inferior. Anything that was imported, even if it was from China, was ‘it’.”

So she started off with the European set who understood the appeal of the handmade. She found them at Design Indaba Expo in 2006 and has exhibited every year since then.

“Slowly, slowly, the South African women started buying my shoes,” she says – and now her shoes are sold in Amsterdam and Belgrade, Melbourne and Bredasdorp. 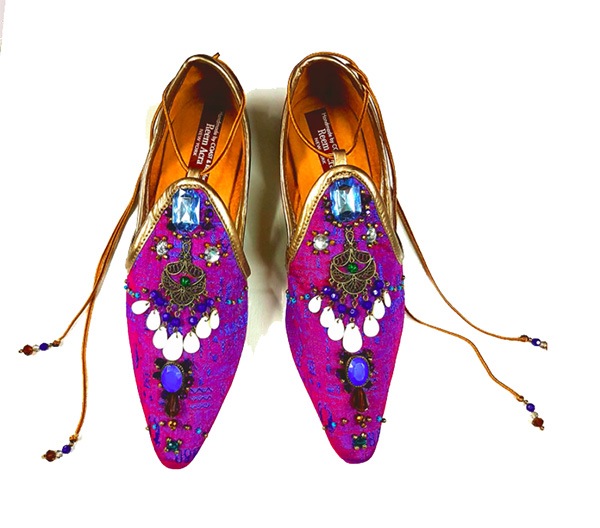 BUMPS ALONG THE WAY

The ups and downs of building a small design brand were unremitting. “Every week there’d be another challenge and I thought I wouldn’t make it. Like any business you fly by the seat of your pants. You just have to get back up.”

Her creative antenna are always tuning in, whether she likes it or not.

She is a voracious collector of fabrics and trimmings on her travels. “You’ve got to have a connection. You fall in love. It’s got to speak to you. I believe we have muses in the ethereal world. Sometimes they are Indian, other times Arabic.” 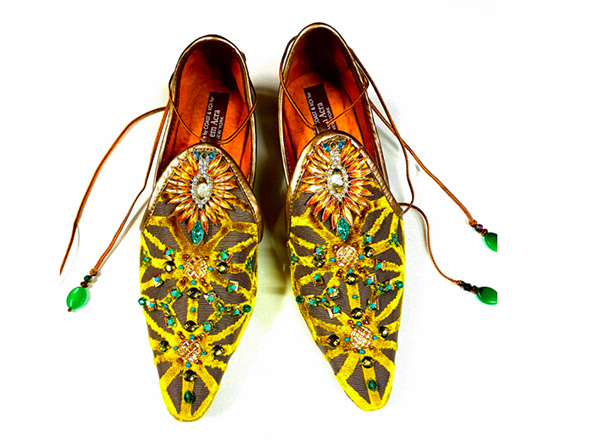 A dreamer by nature, she has made her peace with the pragmatic side of her business: “I used to have a huge showroom but the rentals killed me,” she says. “The minute you are paying a high rent you are already dead. You have to try to be creative and find another way.” She is adept at bringing an element of fantasy to whatever she works on, be it shoes, a runway show or her garage-turned-shop space.

“Don’t be afraid to bring people to your home. If you’re creative with the space, people don’t mind. In fact, it’s far more exciting than going to a store because its real.”