Julia Lundsten has made a name for herself as a most promising and gifted shoe designer, with her label FINSK, launched in 2004. London based Finnish born Lundsten, who has been dubbed the Eames of footwear, has established herself as a designer with a strong vision and unique, directional style.

She graduated from London’s Royal College of Art in 2003 and won the prestigious Manolo Blahnik Award two years running. ‘Exquisite, divine and perfect’ are just some of the words Blahnik has used to describe her shoes. 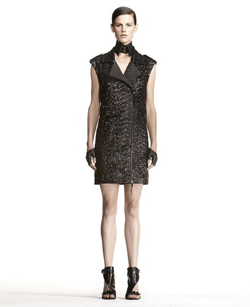 With an architect father and interior designer mother, Julia has cultivated an eye for design, clearly reflected in her work. Some of her biggest inspirations have derived from architecture, including buildings and furniture details as well as structures found in nature. Likening a shoe to that of a chair, Julia says the heel and sole are the chair legs, with the upper, the seat.

She was awarded the prestigious Young Designer of the Year Award in Finland for 2007.